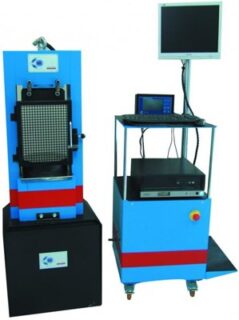 The single axis test is carried out by applying an increasing load at a constant pressure speed of between 0.5 and 1.0 MPa/s. Axis and diameter deformation must be measured with great precision (approx.5 x 10-6). Afterwards, loading and unloading cycles are applied to determine compressibility properties. These tests require the use of a servo power system. The system should be servo-controlled and not simulated, since the tests require application of very precise loads during very precise time periods.
The machine is controlled by the software installed. The software was developed by our own IT department.
Programming, in a Labview environment, enables the machine to be controlled via the National Instruments card (installed in the PC).
The card, the software and the servocontrol provide precise test control, to ensure gradients are controlled during both loading and unloading processes. The system captures up to 100,000 data per second. As a result, the applied force is controlled very effectively and real test result graphs can be obtained. In turn, the 16-channel card allows the user to add new transducers to the machine for new tests, such as elasticity modulus calculations, Poisson coefficient, etc. The machine 's control facilitates dynamic tests. For example, the application of a load during a period of time without breaking the specimen, reducing the load and maintaining the time period, applying a second load (equal to or greater than the first load) and so on while programming as many loading and unloading cycles as desired.