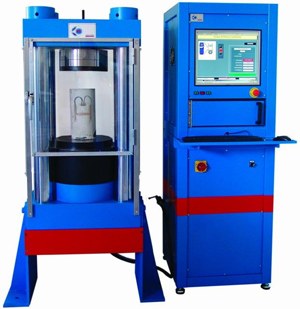 For material testing, computer-controlled by ETIWIN.
Computer-controlled compression testing machine with 3000 kN capacity. This machine can be used for compression tests in cylindrical, cubic, prism and indirect tensile test specimens. Computer control is installed in a separate module. The machine is supplied with ETI-WIN software, ENAC calibration certificate and instructions.
The top plate includes a round self-locking ball joint with its centre of rotation on the base of the plate to prevent lateral stresses and the resulting application of axial forces on the test specimen.
The servo-control performs an automatic closed loop control of loads from 2000 Kg, to ensure that load application is constant and uniform.
The hydraulic cylinder and piston are made of special ground steel. An end-stop device restrains the piston.
The machine is controlled by software. The software was developed by our own IT department. Programming, in a Labview environment, enables the machine to be controlled via the National Instruments card (installed in the PC). The card, the software and the servo-control allow precise control of the test with capacity for collecting up to 100,000 data items per second. As a result, the applied force is controlled very eff ectively and real test result charts can be obtained.
In addition, the 16 channel card can be used to add new transducers to the machine to perform new tests such as elastic modulus calculation, Poisson coefficient, etc.
The control of the machine makes it easier to perform dynamic tests. For example, the application of a load during a period of time without breaking the specimen, reducing the load and holding it steady for a period, applying a second load (equal to or greater than the first load) and so on while programming as many loading and unloading cycles as desired.