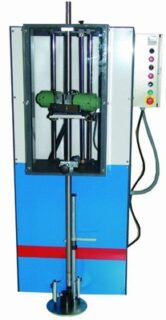 The machine consists of:
A metal rack with a four-point anchoring system at the bottom that acts as a support for all the mechanical systems of the machine. The front of the rack has a plexiglass window through which the compaction hammer mechanism system can be viewed.
A set of electromagnetic fastening clamps that lift and release the hammer, equipped with rotation adjustment to adapt to the various tests to be performed.
The fastening clamps are also equipped with rubber parts that are easy to replace in the event of excessive wear.
The signifi cant advantage of this system over other chain-driven systems or similar is that wear and deterioration due to fatigue are limited to the rubber parts of the fastening clamps, since these are the only parts of the equipment that are in contact with the compaction hammer. Control and display module.