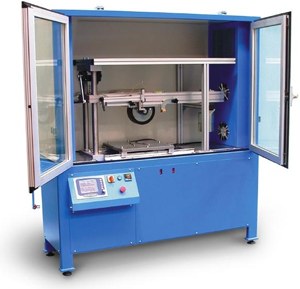 Standards EN 12697-22; BS 598: Part 110: 1996; Austroads 01:2004
The wheel tracker machine is used to evaluate the resistance to permanent plastic deformation of bituminous materials under conditions that simulate the effect of traffic. A loaded wheel passes over a specimen under specific load, speed and temperature conditions and the wheel tread is controlled continuously during the test. The test samples can be specimens that are prepared with a compactor or 200 mm diameter samples.
Standard EN 12697-22 describes two testing methods and both can be performed with this wheel tracker machine. Only two specimens need to be tested to obtain results for a given material.

Characteristics:
The test slab is placed on a table that moves over a distance of 230 mm on support tracks at a pre-defined speed.
A wheel covered in solid rubber passes over the slab; as the test progresses, the depth of the track caused by deformation is determined by a calibrated displacement transducer.
The equipment is monitored and the test data are collected by an interface unit using the software.
The software automatically starts the wheel tracker machine, maintains the required speed, measures the progress in the depth of the permanent deformation and temperature of the slab, provides a continuously updated screen graph of the deformation/ depth of the track versus time and stops the wheel tracker machine when the test ends. When the test ends, the permanent deformation speed is calculated and a test report can be printed using the software.
Easy to use software running under Windows.
Integrated temperature control chamber.
Test temperature between 30 &deg;C and 65 &deg;C
Tests for a specific number of steps or specific tread depth.
Double-pane glass doors for better test observation.
Specimen conditioning at test temperature.
Automatic test start/stop and temperature control.
The machine is delivered with a calibration certificate.
The slabs can be compacted by the compacting roller and tested by the wheel tracker machine without removing them from the mould.